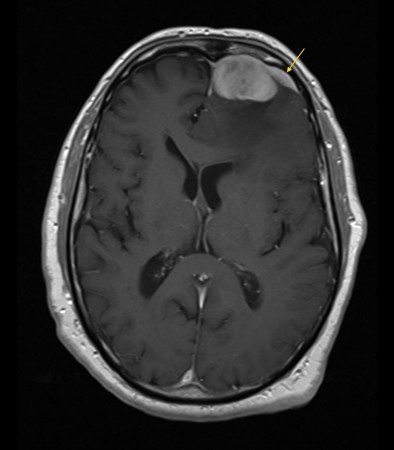 Meningioma. These common and often incidental tumours usually enhance avidly on post-contrast imaging, as is the case in this example (T1-weighted post-contrast image). A characteristic finding in meningiomas is the presence of some enhancing tumour extending away from the mass along the dura, called a ‘dural tail’ (arrow). On CT, meningiomas are often hyperdense on non-contrast imaging, and frequently contain a lot of calcification. In this patient’s case, the meningioma is causing considerable mass effect on the adjacent frontal lobe, as well as some midline shift. The relatively low signal in the left frontal white matter is due to vasogenic oedema, which would be expected to return high signal on T2-weighted and FLAIR sequences.