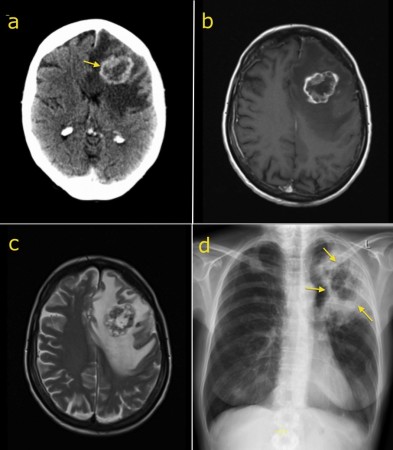 Brain metastasis. This patient presented to the ED with right-sided weakness. The post-contrast CT brain (a) shows a ring-enhancing mass in the left frontal lobe (arrow). It is surrounded by extensive low attenuation, which is confined to the white matter (note the normal appearance of the cortex). This is called ‘vasogenic oedema’, and can be seen around metastases, primary brain neoplasms and abscesses. Post-gadolinium T1-weighted MRI (b) shows a similar appearance of the rim-enhancing mass. T2-weighted image (c) shows the dramatic high-signal oedema surrounding the mass, which is contributing to the mass effect. Chest radiograph (d) shows a cavitating mass in the left upper zone (arrows), which was confirmed on biopsy to represent a primary bronchogenic neoplasm.