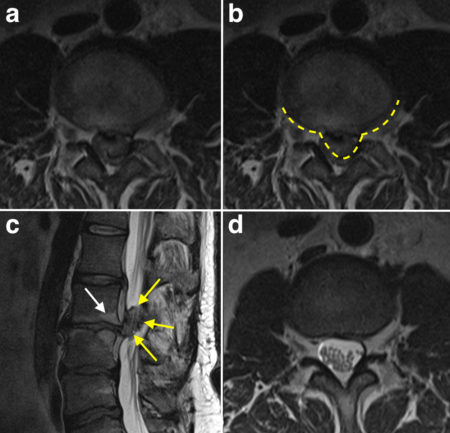 This is an example of one of the most common indications for an emergency MRI.

This woman in her 40s presented with acute onset of lower limb weakness and urinary incontinence and her ED physician suspected compression of the caudal equina based on his clinical examination.

In this figure, image (c) is a sagittal T2-weighted MRI (note the bright CSF). You will notice that the height of the L2-3 intervertebral disk is reduced when compared to the other disks, and there are signal changes in the vertebral endplates either side of this disk (indicated by the white arrow) – these are called ‘reactive’ marrow changes and are very common in the lumbar spine when there is degenerative disk disease. Extending posteriorly from the disk space, there is a very large disk extrusion (yellow arrows).

Transverse T2-weighted imaging at this level (a) shows that the disk extrusion has completely displaced the CSF from the spinal canal at this level – the contour of the disk is outlined by the dashed line on the same image in (b). To show you what it should look like, I’ve included another transverse T2-weighted image from the same patient’s MRI taken at a lower level (d), in which you can see the normal bright CSF surrounding the cauda equina nerve roots.

The most common cause of acute cauda equina compression is a disk herniation – rather than being a simple disk ‘bulge’, it is usually due to herniation of a large component of the nucleus, called an extrusion, as in this example. Other potential causes include an epidural haematoma, due to trauma, or an epidural abscess, due to spread of infection from an adjacent disk or vertebra. Compression by tumour can also occur.

When clinically suspected, emergency MR imaging is required – any delay in diagnosis and surgery can lead to permanent neurological deficit. This is the most common reason for on-call, out-of-hours MRI in our hospital.