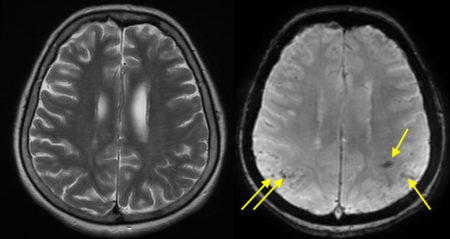 This condition is being identified with increasing frequency with the now widespread use of a type of MRI sequence called ‘susceptibility weighted imaging’, explained in more detail below.

Cerebral amyloid angiopathy (CAA) is caused by the build up of amyloid deposits in the walls of blood vessels in the brain and meninges of elderly patients. It is often asymptomatic however patients may also present acutely with intracranial haemorrhage or stroke-like symptoms, or subacutely with dementia.

The weakening of the blood vessel walls in these patients predisposes them to microaneurysm formation, which in turn results in small haemorrhages. Therefore, the hallmark of CAA on imaging is the presence of microhaemorrhages, however it should be noted that imaging findings can only be used to predict a probable diagnosis of CAA – a definite diagnosis requires an autopsy. These microhaemorrhages are not visible on CT, and are also invisible on most of the standard MR sequences we use for brain imaging (for example, T1-weighted, T2-weighted and FLAIR sequences).  Instead, we rely on a sequence known as susceptibility weighted imaging which is a relatively new MR technique that is designed to pick up areas of haemorrhage and calcification.

As you can see in this example of a case of probable CAA, the susceptibility weighted image on the right shows multiple small areas of very low signal in both parietal lobes, some of which are indicated by the arrows. These are microhaemorrhages –  note how they are not visible on the T2-weighted image on the left. The microhaemorrhages of CAA characteristically occur at the grey-white matter interface, as in this example. This helps to differentiate them from the microhaemorrhages we often see in hypertensive patients, which typically occur in the basal ganglia and pons. Likewise, when patients with CAA present with acute intracerebral haemorrhage, this usually occurs peripherally unlike the typical basal ganglia location of hypertensive haemorrhage stroke.