Encephalomalacia due to old MCA infarct 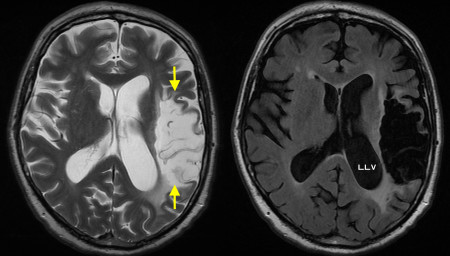 This case shows the end result of a large middle cerebral artery territory infarct. Over time, the necrotic brain undergoes liquefaction and becomes progressively lower density on CT and progressively higher signal intensity on T2-weighted MRI. The image on the left here is a T2-weighted MR and shows the large area of encephalomalacia (arrows). On the right is a FLAIR image (which suppresses the signal from CSF) and shows that the signal in the infarcted area tracks that of the CSF in the ventricles and sulci. Another feature of encephalomalacia is that the associated volume loss often results in compensatory dilatation of the adjacent lateral ventricle, as in this example (LLV= left lateral ventricle). Differentiating new from old infarcts is usually relatively straightforward on MRI (especially if we look at the diffusion-weighted sequence – have a look at the MRI section if you need to recap your knowledge of MR sequences), but it’s worth knowing that recent infarcts will be hyperintense on FLAIR and will be associated with mass effect rather than volume loss, resulting in compression of the adjacent lateral ventricle.