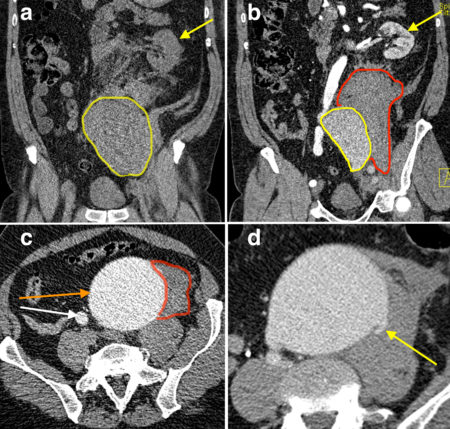 This case illustrates an important rule of thumb: Beware the older (>60) patient who presents with renal colic for the first time – instead consider alternative, more life-threatening pathology.

This man in his 60s presented to ED with acute severe left flank pain.

Although he had no history of same, a ureteric calculus was suspected and a CT KUB (kidneys/ureter/bladder) was requested. A CT KUB, performed without any iodinated contrast, is the gold-standard imaging test for evaluating renal colic as it has a very high sensitivity for renal and ureteric calculi. It also has the advantage of being able to show alternative causes of flank pain if there are no ureteric calculi.

In this patient’s case, no renal or ureteric calculi were visible, however the left kidney was displaced superiorly and anteriorly (yellow arrow on coronal CT image (a)) by a large high density retroperitoneal mass near the pelvis brim (outlined in yellow). The radiologist on call was suspicious that this represented blood and so brought the patient back for a multiphase post-contrast CT to further investigate. This showed enhancement of the medial aspect of the mass (outlined in yellow on coronal image (b)), with no enhancement of the more lateral component (outlined in red). The latter represents retroperitoneal haemorrhage. This was caused by rupture of the enhancing abnormality, which was a huge aneurysm of the left common iliac artery (indicated by the orange arrow on transverse image (c) – the normal right common iliac artery is indicated by the white arrow for comparison). The adjacent haematoma is again outlined in red. On the delayed phase (d), the breach in the aneurysm wall is visible (arrow).

The patient underwent emergent open repair of the aneurysm and has made a good recovery.

Common iliac artery aneurysms are rare, accounting for fewer than 2% of all aneurysms1. Classically, when an elderly patient presents with their first bout of renal colic, we need to consider a ruptured abdominal aortic aneurysm however the mechanism of the mimicry is the same in the current case – the rupture leads to retroperitoneal haemorrhage which can cause compression and displacement of one or both ureters and kidneys.

Other potential mimics of renal colic, most of which may be identified on CT, include2: