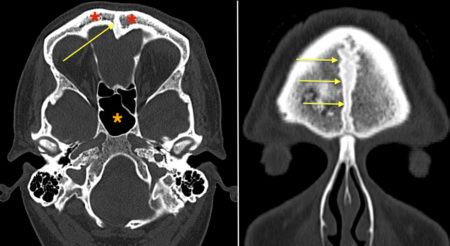 This is an example of normal variant anatomy that is commonly picked up incidentally on head CT. This midline suture known as the metopic suture separates the frontal bones at birth, but usually fuses and disappears in infancy. When it persists, it prevents the frontal sinuses from developing properly, if at all.

In the example above, the suture is indicated by the yellow arrows on the transverse CT image, left, and the coronal CT image on the right. The normal sphenoid sinus is indicated by the orange asterisk, however the red asterisks have been placed where the frontal sinuses would normally be expected. A persistent metopic suture has been reported to occur in up to 6% of adults. It is not really of any clinical import, although it could potentially be misinterpreted as a frontal bone fracture by someone unfamiliar with it.

Some of the other skull sutures are shown on the image below.

Another common cause of absent or hypoplastic frontal sinuses is cystic fibrosis; in these patients, who are of course prone to chronic sinusitis, hypoplasia of any or all of the other paranasal sinuses can also occur. 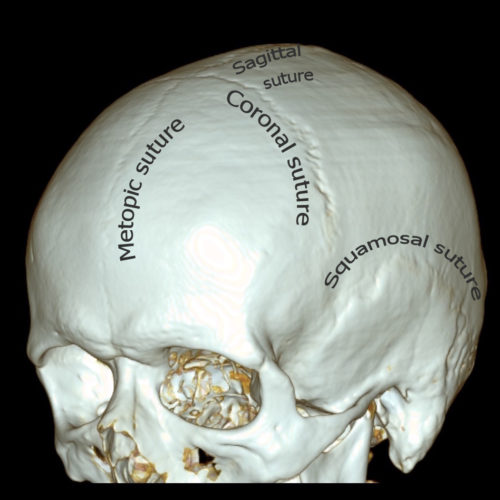