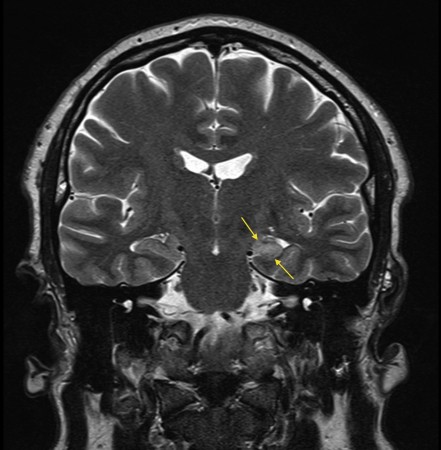 This is a coronal T2-weighted MR image from a 40 year old man who presented after a tonic-clonic seizure. We routinely perform high resolution coronal MR imaging when patients are referred for investigation of epilepsy, as this is the best method for detecting one of the most common structural abnormalities associated with seizures: mesial temporal sclerosis, also known as hippocampal sclerosis. When comparing the two sides, the abnormal hippocampus is typically atrophic relative to the normal side, and also returns higher signal on T2-weighted imaging. These features are clearly demonstrated in this example, on the left side (arrows). One of the other abnormalities we search for in patients with seizures is the presence of heterotopic grey matter, which is due to a neuronal migration anomaly, sometimes associated with other, more dramatic, structural malformations of the CNS such as absence of the corpus callosum.