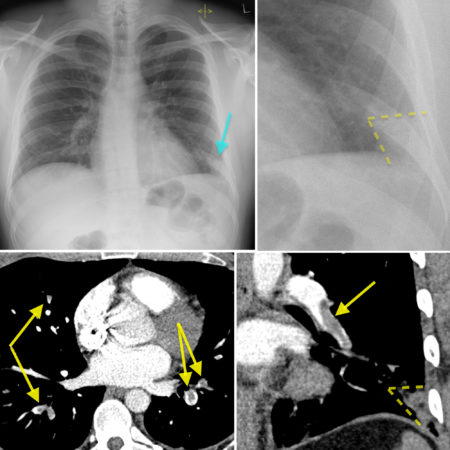 This 31-year-old man presented to the ED with acute left-sided chest pain, pleuritic in nature.
His chest radiograph shows a wedge-shaped opacity in the periphery of the left lung base (arrow, also outlined by the dashed lines on the magnified image on the top right). The chest radiograph is otherwise normal.

A CT pulmonary angiogram (CT PA) was performed (look at this page for a reminder of how these are carried out). This shows multiple filling defects in pulmonary artery branches in both lungs, consistent with bilateral pulmonary emboli (yellow arrows). There is a large clot in the left lower lobe artery (arrow, bottom right image). A wedge-shaped density is again evident at the periphery of the left lower lobe. In the setting of large pulmonary emboli, this is consistent with a pulmonary infarct.

This sign, ‘Hampton’s Hump’, is one of the classically described radiographic features of a pulmonary emboli, and is more likely to be present when there are multiple, large emboli. However, it is not commonly encountered in day-to-day practice. The vast majority of pulmonary emboli do not result in pulmonary infarction; this is due to the collateral blood supply from the bronchial arteries.

Other potential radiographic abnormalities in patients with a PE include:

However, it is important to note that the main purpose of a chest radiograph in a patient with a possible PE is to exclude alternative pathology (such as a pneumothorax or pneumonia), and also to facilitate arranging a V/Q scan (as these need to be interpreted alongside a recent chest radiograph).

CT pulmonary angiography is now the gold standard for PE diagnosis and takes only a few minutes to perform.