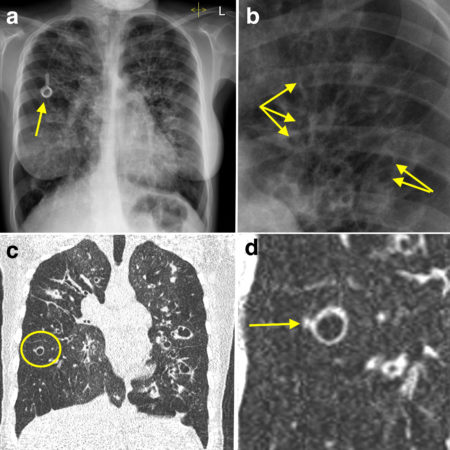 Bronchiectasis can be tricky to identify on chest radiographs, and is often only clearly apparent when it is severe as in this example, from a young patient with cystic fibrosis. On the CXR (a), you will notice that the lungs are hyperinflated (note the depressed diaphragms and the obtuse costophrenic angles). There is a Port-a-Cath in-situ (arrow). The most common scenarios to see one of these venous access devices in our institution is in oncology patients undergoing chemotherapy and in patients with cystic fibrosis.

There are multiple cystic structures visible in the lungs, particularly in the mid and upper zones. These are easier to identify on the magnified image (b), indicated by the arrows. These represent grossly dilated bronchi. Corresponding coronal CT chest image (c) depicts these dilated bronchi much more clearly. In addition, in the right lung you can see one of the typical CT signs of bronchiectasis, known as a ‘signet ring’ sign – this is outlined by the circle and a magnified version of it is shown on image (d). This appearance is caused by the dilated bronchus with its accompanying pulmonary artery – the artery is the small soft tissue nodule lateral to the bronchus and indicated by the arrow. Normally, the artery is around the same diameter as the adjacent bronchus, hence this sign is useful when diagnosing mild bronchiectasis on CT.

There are several potential causes of bronchiectasis, including congenital disorders, bronchial obstruction (for example, by a benign neoplasm), chronic infection and ‘traction’ bronchiectasis (caused by an adjacent fibrotic process – see an example of this here).