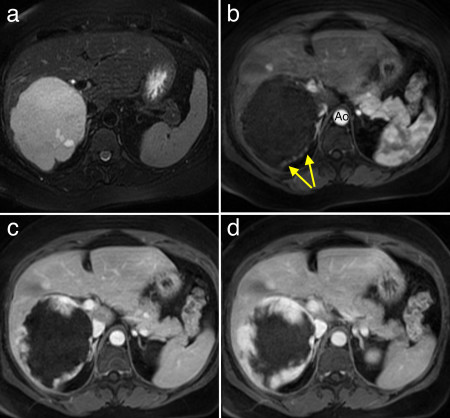 One of the most common benign lesions we encounter when imaging the liver, after cysts, are haemangiomas. These are usually incidental findings and are regularly identified at ultrasound examinations that are being performed for various reasons, for example suspected gallstones. They are typically well defined and echogenic (bright) at ultrasound, although sometimes we have difficulty being certain of the diagnosis (particularly if the patient has a background of malignancy, in which case metastatic disease is in the differential diagnosis). In these circumstances we can offer additional imaging using a multiphasic contrast-enhanced study. Options include triphasic CT liver, MRI liver and also contrast-enhanced ultrasound (CEUS – see the section on contrast media for more on this).

The typical appearance of a haemangioma on any contrast-enhanced study is that it enhances slowly, beginning at the periphery of the mass where it characteristically has a ‘nodular’ appearance. The enhancement then gradually works its way towards the centre of the lesion.

This is an example of a ‘giant haemangioma’ in a young woman, picked up incidentally. To be considered ‘giant’, haemangiomas need to be over 10 cm in size (this one was 11 cm). The haemangioma is high signal (bright) on T2-weighted MRI (image ‘a’). Images ‘b’ through ‘d’ are T1-weighted post contrast images obtained at different time intervals after injection of the gadolinium. Note how the mass begins to enhance in a nodular fashion at its periphery (arrows on ‘b’ – you can also see the contrast in the aorta ‘Ao’), with subsequent images showing progressive enhancement towards its centre.

The vast majority of haemangiomas are asymptomatic, however larger lesions can potentially cause pain and, infrequently, may rupture causing haemorrhage into the peritoneal cavity. A rare complication of a giant haemangioma is the Kasabach-Merritt syndrome, where the haemangioma sequesters platelets leading to severe thrombocytopenia and potentially disseminated intravascular coagulation.