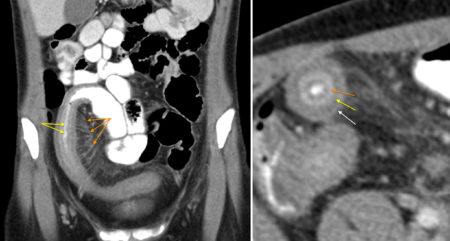 This 33-year-old woman presented to the ED with right-sided lower abdominal pain. Acute appendicitis was suspected and a CT abdomen requested.

The appendix was normal, however the CT demonstrated several of the classic imaging features of Crohn disease.

The coronal image on the left shows a long segment of very abnormal distal ileum. The bowel wall is thickened and oedematous (see below). There is also engorgement of the mesenteric vessels (orange arrows). These vessels are usually smaller and closer together, but in active Crohn disease they become distended and are frequently spaced further apart due to fibrofatty proliferation of the mesentery, resulting in an appearance likened to a comb, as in this example.

Another classic sign of Crohn disease is the long segment of narrowing of the small bowel lumen, which is illustrated by the thin line of oral contrast in the lumen indicated by the yellow arrows. This sign was originally used to describe the appearance of the long strictures typical of Crohn disease on barium studies, and is known as the ‘string sign of Kantor’. You can see an example of this on barium follow-through here.

On the transverse image on the right, we see a cross-section through the abnormal ileum that shows what is known as the ‘target’ sign. This sign is visible on IV-contrast-enhanced CT when inflamed, thickened bowel wall demonstrates three distinct concentric layers, and looks like a target. The layers are: the enhancing, hyperaemic outer serosa (white arrow), the relatively low density middle oedematous submucosa (yellow arrow), and the inner hyperaemic and enhancing mucosa (orange arrow). In addition, there is a central very high density ‘bullseye’ in this example due to oral contrast. Although classically associated with active Crohn disease, the target sign is not specific for this condition and can be seen in several others causes of bowel wall thickening, for example ischaemia, intramural haemorrhage, vasculitis and sometimes infection.

A similar appearance can be seen in chronic Crohn disease when the submucosa becomes infiltrated with fat, which is called the ‘fat halo’ sign. This should not be confused with the target sign of active inflammation; in the fat halo sign, the middle layer is significantly lower in density than it is in the target sign (-20 to -60 Hounsfield Units).