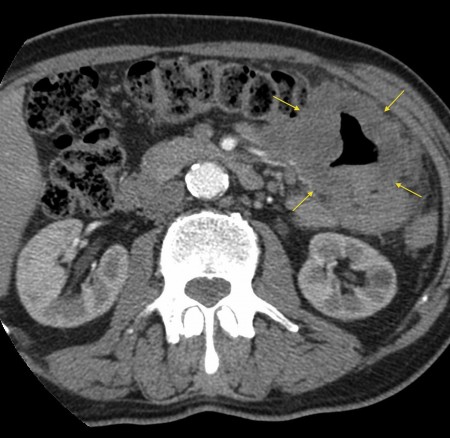 Small bowel lymphoma. This CT image shows diffuse, irregular thickening of the wall of a portion of the small bowel (arrows). Despite the severity of the mural thickening, the gas-filled lumen of the affected bowel is actually dilated rather than narrowed. This feature is known as ‘aneurysmal dilatation’ of the bowel, and is typical of lymphoma. Small bowel lymphoma may involve more than one segment of the bowel. Risk factors for small bowel lymphoma include coeliac disease, Crohn disease, AIDS and previous transplantation (resulting in post-transplant lymphoproliferative disorder, PTLD).