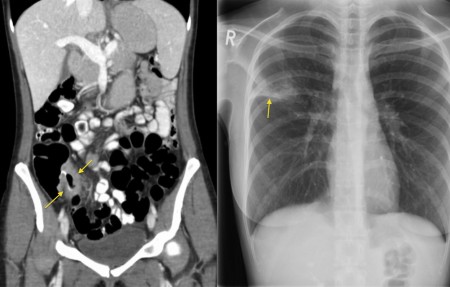 This woman presented with right iliac fossa pain. The coronal CT image shows thickening of the wall of the terminal ileum (arrows), with some stranding of the surrounding fat indicating an inflammatory process. This appearance has a long differential diagnosis including Crohn disease, unusual infections such as Yersinia, TB and Actinomycosis, and small bowel neoplasia. In this case, the possibility of TB was raised and a chest x-ray suggested. This showed right upper lobe consolidation (arrow, note that it is above the horizontal fissure), which was due to TB. Most of the time, small bowel or colonic TB is caused by the patient ingesting sputum coughed up from an affected lung, which is a nice thought.