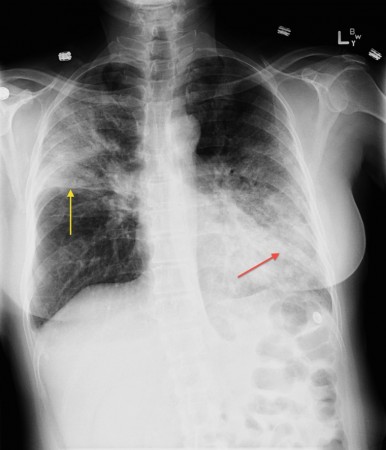 RUL and lingular consolidation. This patient has consolidation (with some air bronchograms) in the right upper lobe. We know this because it is clearly bordered inferiorly by the horizontal fissure (yellow arrow). If the consolidation hadn’t extended as far as the fissure, we wouldn’t know for sure that the upper lobe was involved, because the apical segment of the lower lobe extends surprisingly high in the hemithorax. In such cases, we could confirm the location by doing a lateral CXR – upper lobe consolidation will be anterior to the oblique fissure on a lateral. There is also consolidation in the lingula, slightly obscuring the left heart border (red arrow). In this case, the consolidation was due to TB.