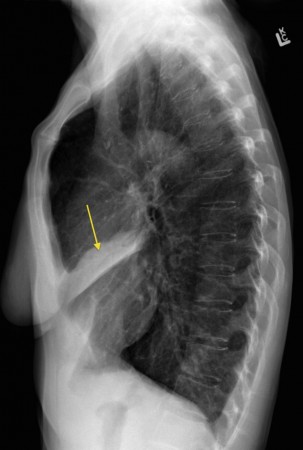 RML collapse. The typical appearance of right middle lobe collapse on a lateral CXR is the presence of a wedge-shaped opacity projected over the heart shadow, as shown here (arrow). The opacity is demarcated inferiorly by the oblique fissure. The horizontal fissure forms the superior boundary of the opacity, but when the lobe has collapsed the fissure is pulled inferiorly and will no longer be ‘horizontal’.