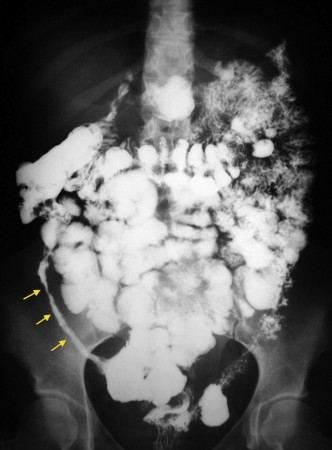 Crohn disease. This is another classic example of Crohn disease on a small bowel follow through. In this case, there is severe stricturing of a long segment of the terminal ileum (arrows). This is called, rather ominously, the ‘string sign of Kantor’. This image also demonstrates another typical feature of longstanding Crohn disease – the affected bowel loop seems to be separated from the normal small bowel. If we did a CT in this case, we would see a large amount of fat around the affected terminal ileum, which is what is pushing it away from the rest of the bowel. This is called ‘creeping fat’.