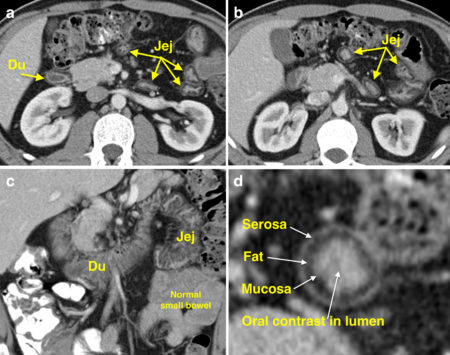 This 40-year-old man presented with progressive abdominal pain and was referred for an abdominal CT. The CT did not show any acute findings, however there is an unusual pattern in the duodenum and proximal jejunum – their walls are infiltrated with submucosal fat.

On the two transverse images (a) and (b), you can see a rim of fat density in the wall of the second part of the duodenum (‘Du’), as well as in several segments of proximal jejunum (‘Jej’). The coronal image (c) shows the duodenal and proximal jejunal involvement more clearly – you can also see several segments of normal distal jejunum for comparison.

This appearance of the small bowel is likened to a target, with concentric layers of alternating density – the enhancing serosa and mucosa with the low density fatty submucosa between them, outlined in the magnified image (d).

Submucosal fatty infiltration of the small bowel can be seen in several conditions: obesity, chronic Crohn’s disease, patients who have undergone chemotherapy, and coeliac disease. The distribution of the fat can be helpful in narrowing the differential diagnosis; in Crohn’s disease, submucosal fat will predominate in the terminal ileum, while in coeliac disease, it is confined to the duodenum and/or proximal jejunum, as in this case. This patient underwent a duodenal biopsy which showed partial villous atrophy, consistent with coeliac disease.

A similar ‘target’ appearance can be seen in acute conditions, however in these cases, the submucosal layer is of fluid attenuation rather than fat, due to oedema (see an example of this here). This can be seen in acute Crohn’s disease, infection, ischaemia and portal hypertension.

Coeliac disease can present with abdominal pain, as in this example, or with iron deficiency anaemia, malabsorption or diarrhoea. Findings on CT are variable and the scan may be normal. When abnormal, features include: jejunal distension, reduced prominence of the jejunal folds, prominent mesenteric lymph nodes, intussusception, and the fat target appearance illustrated in this example.