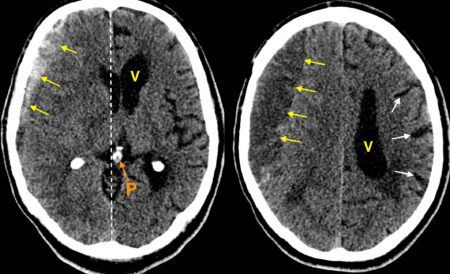 Both acute and chronic subdural haematomas are common findings on CTs performed on patients presenting to our ED. Not infrequently, both will be present at the same time, as in this example from an elderly man who presented after a fall.

These images are taken from the same CT; the image on the right is at a more superior level to that on the left.

On the left-hand image, there is an extra-axial collection of high attenuation material overlying the right frontal and parietal lobes, arrows. This is much higher density than the adjacent brain parenchyma and is consistent with acute haemorrhage. Although it doesn’t have the classic ‘crescent’ shape of a subdural haematoma, it extends beyond the expected locations of the skull sutures and so it cannot be an extradural haematoma (see the examples below). On the right-hand image, we can see that the superior aspect of the haematoma (yellow arrows) is of lower attenuation than the brain parenchyma, indicating that this represents old (more than 3-4 weeks) haemorrhage. Therefore, this is an ‘acute-on-chronic’ subdural haematoma.

Several other important features are illustrated in this example. When large enough, subdural haematomas may cause significant mass effect. In this case, there is shift of midline structures to the left (the midline is indicated by the dashed line). For example, the high density, calcified pineal gland (‘P’) is a midline structure, but lies several millimetres to the left on this image. The left lateral ventricle ‘V’ is clearly seen but the right lateral ventricle is barely visible – we describe this as the ventricle being ‘effaced’. You will also notice that the sulci (white arrows) between the gyri in the left cerebral hemisphere are quite prominent (due to the pre-existing atrophy). However, the sulci of the right cerebral hemisphere are not visible because they have also been effaced.