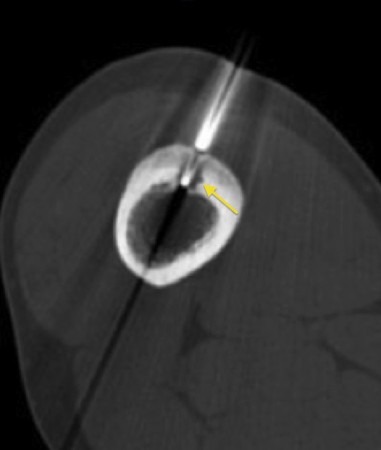 RFA of osteoid osteoma. The small lytic lesion (arrow) in the anterior cortex of the femur in the 18 year old male patient was an osteoid osteoma. The patient had presented with severe pain, worse at night. The traditional treatment for such tumours was surgical resection however they respond very favourably to radiofrequency ablation, which is now the treatment method of choice – this CT image shows the ablation needle, its tip positioned in the centre of the osteoid osteoma. Ablation of these lesions typically takes less than an hour and many patients report immediate relief of symptoms.