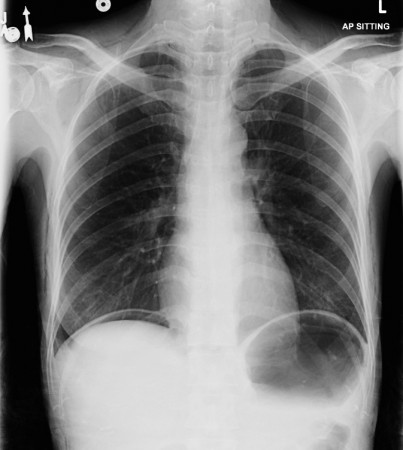 Pneumoperitoneum. This example shows a large amount of free gas under both sides of the diaphragm. In this case, the aetiology was iatrogenic – the patient was immediately post laparoscopic surgery. When performing an erect CXR for possible free gas, it is important that the patient sits upright for 15-20 minutes before the radiograph is taken, to allow the gas time to rise. If the patient can’t sit up, because of pain for example, we can do a film called a left lateral decubitus (an abdominal x-ray with the patient lying on their left side) – this allows the gas to collect above the right lobe of the liver. In practice, we don’t perform this any more as patients in whom there is a strong concern about perforation who are too sick to sit upright for an erect CXR will usually go straight to CT.