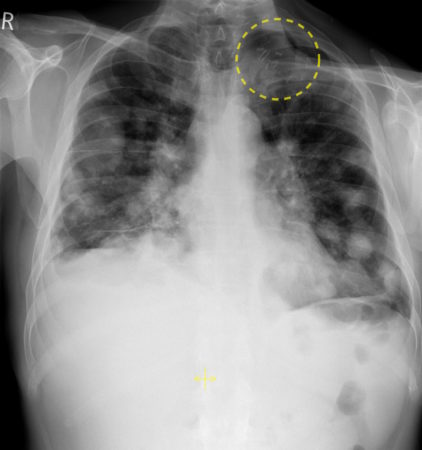 This man presented with dyspnoea.

His CXR shows multiple rounded lung nodules, typical of metastatic disease. In this case, we are able to guess the origin of the metastases as there evidence of previous extensive surgery in the neck – you will note that there are multiple surgical clips in the left supraclavicular region, outlined by the yellow circle. The patient had a history of laryngeal squamous cell carcinoma, treated surgically, and had subsequently developed metastatic lymphadenopathy in the left side of his neck, for which a neck dissection was performed (explaining the clips).

As a medical student, you might easily be shown a case like this where there are lung metastases and where there is a clue to their source on the CXR. In addition to evidence of a background of head and neck cancer, as in this example, surgical clips in the neck might also be due to thyroid surgery for thyroid carcinoma (especially if they are closer to the midline). Also look for evidence of previous mastectomy, or wide local excision – you may identify surgical clips in the breast and/or the axilla. Occasionally, you might spot clips in the right or left upper quadrant if enough of the abdomen is included on the CXR, which might be a clue to previous nephrectomy for renal cell carcinoma, for example.

You should also look for evidence of other metastases when presented with a film like this. Search for a pleural effusion, hilar lymphadenopathy, or bone metastases (which will usually be lytic but in a patient with previous breast cancer are more typically sclerotic).