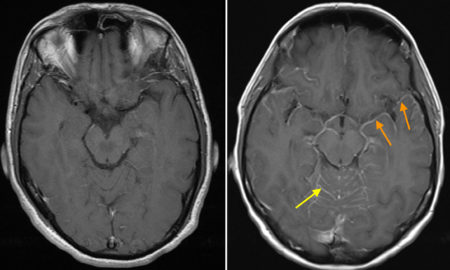 A form of intracranial metastatic disease that is often impossible to diagnose with CT is leptomeningeal carcinomatosis. Contrast-enhanced CT is usually negative unless the condition is very advanced, and lumbar puncture for CSF cytology is prone to false negative results.

Contrast-enhanced MRI has a much higher sensitivity than CT (although it is still prone to false negatives), and is therefore the diagnostic test of choice when meningeal infiltration is suspected.

In this example, for comparison purposes I have included a normal T1-weighted post-contrast MRI image on the left. On the right is an image from a patient with a history of breast cancer – it is also a T1-weighted post-contrast image but you will notice a striking difference between the two in the form of multiple linear hyperintensities (yellow arrow) representing enhancing metastatic disease involving the meninges of the cerebellar folia, with additional meningeal enhancement around the cerebral hemispheres (most obvious at the anterior aspect of the left temporal lobe, orange arrows).

The most common primary neoplasms to cause leptomeningeal infiltration are breast and lung cancer. Melanoma and lymphoma are other sources to consider, as well as primary intracerebral tumours such as glioblastoma.