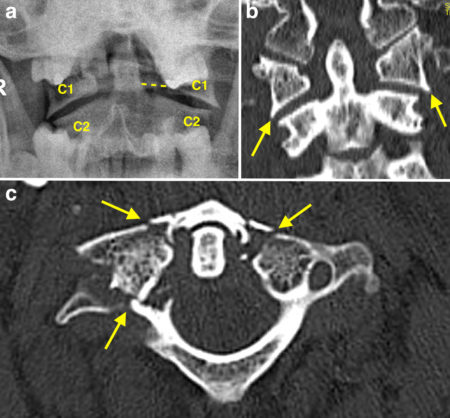 This case illustrates just how subtle significant cervical spine injuries can be on radiographs, why it’s important to have a low threshold for ordering a CT and indeed why many centres have abandoned cervical spine radiographs altogether in favour of going straight to CT when an injury is suspected.

The patient, a young man, was involved in a road traffic accident and suffered a head injury.

Because of the mechanism of injury, a full trauma series of cervical spine radiographs was performed. As a reminder, this consists of an AP, a lateral and an open-mouth or ‘peg’ view. The first two were normal in this case, however the open-mouth view shown in image (a) here demonstrates a subtle but crucial abnormality – the lateral margins of the lateral masses of C1 (labelled ‘C1’) extend beyond the margins of the lateral masses of C2. There is also some asymmetric widening of the gap between the odontoid process of C2 and the medial edges of the C1 lateral masses, indicated by the dashed line.

The abnormal overhang of the C1 lateral masses is easier to appreciate on the corresponding coronal CT image (b), arrows.

The transverse CT image (c) shows three separate fracture sites, arrows – two in the anterior arch and one in the posterior arch.

Although they rarely result in spinal cord injury, Jefferson fractures are important to identify as they can result in instability, are commonly associated with other (potential unstable) vertebral fractures, and are sometimes associated with vertebral artery injury, which in turn can lead to a stroke or death. If you look carefully at this example you will notice that the posterior arch fracture extends into the right lateral mass of C1 and has disrupted the foramen for the vertebral artery (note the intact foramen on the opposite side). We routinely perform CT angiography in this setting to assess for vertebral artery injury.