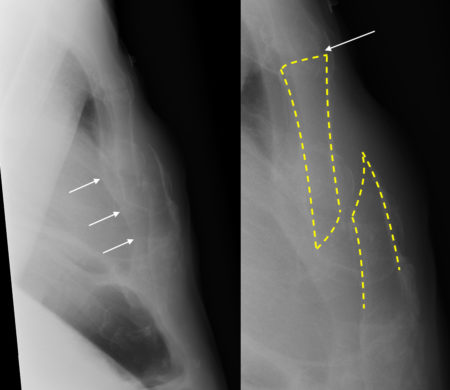 This elderly patient was a passenger in a car accident and was not wearing her seatbelt. She suffered blunt trauma to the chest due to impaction against the dashboard, and was brought to the ED with severe chest pain and dyspnoea.

Due to the high index of suspicion of a sternal injury, a lateral view of the sternum was performed and confirmed a completely displaced fracture. The sternal cortex is outlined by the dashed lines in the magnified image on the right – note the overlapping fracture fragments. The manubriosternal joint is indicated by the arrow.

Sternal fractures are not generally visible on frontal chest radiographs, therefore lateral views are required. However, even on lateral radiographs they are frequently subtle or invisible. A helpful sign is to look for evident of haematoma behind the sternum – the white arrows on the left-hand image in this case indicate soft tissue density extending along the poster border of the sternum, which was due to blood. Normally, there is only low density fat or air visible behind the sternum so this finding should make us suspicious of a fracture in the setting of trauma.

The importance of identifying sternal fractures lies in the fact that they generally indicate that there has been high-energy trauma, and as a result there is a high association with additional injuries such as rib fractures/flail chest, pulmonary contusions, pneumothorax, pericardial injury, vertebral fractures and head injury. The more displaced the fracture, the higher the association with additional chest injuries – in this setting, CT is generally performed for further evaluation.

Occasionally, sternal fractures may occur spontaneously. For example, they may be encountered in patients with osteoporosis – often these patients are kyphotic due to previous osteoporotic compression fractures of the thoracic spine, which likely predisposes to sternal insufficiency fracture. Stress fractures of an otherwise normal sternum can also occur, for example due to repetitive heavy lifting.