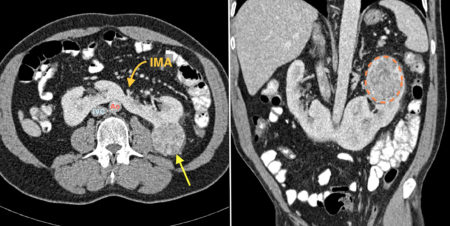 This man in his 40s presented with haematuria and was referred for CT following an abnormal ultrasound exam.

The CT shows a normal variant called a horseshoe kidney, which occurs in around 1 in every 400 people and is more common in males. It is caused by fusion of the lower poles of the kidneys across the midline. The fused component (called the isthmus) prevents the normal ascent of the kidneys during the first trimester; the isthmus becomes trapped between the aorta and the inferior mesenteric artery (‘IMA’ on the image on the left).

In many patients, horseshoe kidneys are asymptomatic and are detected incidentally, however they are prone to several complications:

In this example, there is a 4 cm mass at the upper pole of the left kidney (arrow on left image, circled on the coronal image on the right). This was biopsied under ultrasound guidance and turned out to be a renal cell carcinoma (RCC) – interestingly, the risk of RCC is not increased in patients with a horseshoe kidney.