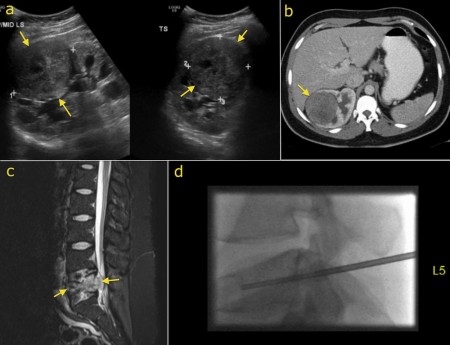 RCC. This patient presented with haematuria. Ultrasound (a) showed a spherical solid mass in the right kidney (arrows). This was confirmed on subsequent renal CT (b), and was considered to be suspicious for a renal cell carcinoma. The patient was also complaining of severe back pain, so an MRI was performed; an image from the STIR sequence of this study is shown in (c). This showed evidence of infiltration of L5, with high signal soft tissue bulging into the spinal canal (arrows). The L5 vertebral body was biopsied under fluoroscopic guidance (d); this biopsy confirmed that the L5 abnormality was due to metastatic disease, and that the primary tumour was an RCC.