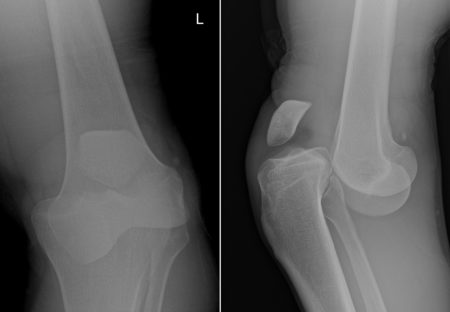 This 30-year-old man was brought to the ED with a deformed left leg following a rugby tackle. It’s difficult not to wince looking at these radiographs, which show a dislocated knee.

Knee dislocation is an uncommon injury and requires fairly high-energy trauma; the majority of cases are seen following road traffic accidents (especially motorcycle accidents), with sports injuries making up most of the remaining cases.

The most common mechanism is hyperextension of the knee, which results in anterior dislocation (i.e., the tibia ends up positioned anterior to the femur, as in this example). Posterior dislocation (see an example of this here) is classically associated with ‘dashboard’ injuries (where the driver or passenger in a car accident is propelled forward and their knees hit the dashboard); this can result in bilateral dislocation.

These entities are different to patellar dislocation, which is a much more common and less severe injury.

A major problem with knee dislocations is that they are almost almost associated with multiple other injuries. As you might imagine, the cruciate ligaments are usually affected and in most patients both the anterior and posterior cruciate ligaments will be ruptured.  The medial and lateral collateral ligaments are also frequently torn, and the tibial plateau or distal femur may fracture.

In around 20% of patients, knee dislocation is associated with injury to the popliteal artery, the common nerve or both of these structures. This is particularly important to be aware of in patients where the dislocated knee has spontaneously reduced prior to arriving at the ED, as these injuries are more easily overlooked in that setting (especially if the patient is unresponsive due to concomitant head injury following, for example, a road traffic accident). If arterial injury is suspected clinically, a CT angiogram should be performed to assess the popliteal artery.

Management involves reduction of the dislocation as well as reconstruction of any ruptured ligaments. Despite optimal surgical care, many of these patients will end up with a reduced range of movement and early onset of osteoarthritis.