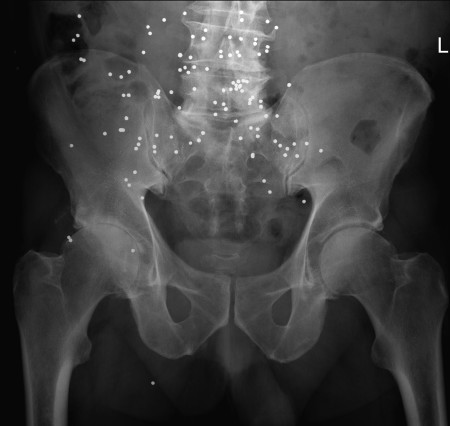 This elderly man was referred for a pelvic x-ray to assess for hip osteoarthritis. An unexpected finding was the presence of dozens of small round metallic densities. On questioning, the patient revealed that he had been accidentally shot in the abdomen by a farmer many decades earlier. He has moderate OA in the right hip – note the joint space narrowing and subchondral sclerosis. Another scenario where you might see shotgun pellets on a pelvic or abdominal x-ray is in someone who has ingested them while eating something that was killed with a shotgun, for example some pheasant or rabbit. Occasionally these ingested pellets will accumulate in the appendix.