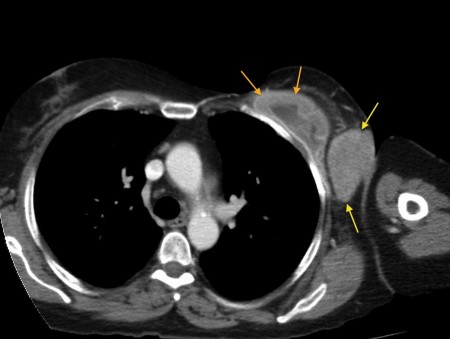 Radiation-induced sarcoma. A potential complication of treating tumours with radiotherapy is that it can cause a second tumour in later life. This patient had had radiotherapy for left breast cancer 10 years previously, and presented with an axillary mass (yellow arrows) adjacent to the breast prosthesis (orange arrows). An ultrasound-guided biopsy was performed, and revealed angiosarcoma. This was presumed to be radiation-induced, given the time interval since radiation and the fact that it developed within the radiation field.