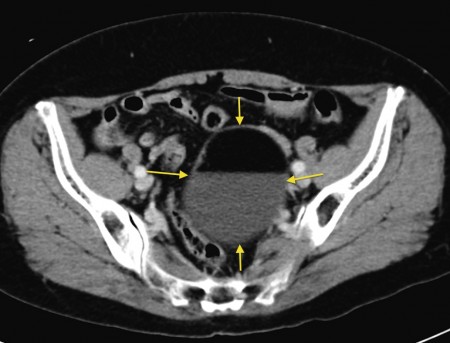 Ovarian dermoid. An incidental finding on this CT, performed in a 75 year old woman, was this large pelvic mass (arrows). The mass contains material of two densities – fat (very low attenuation, anteriorly), and fluid (posteriorly). At the junction between the two densities is a very straight line, called a fat-fluid level. This is characteristic of a dermoid cyst. Occasionally we will see calcification in these, which may in fact take the form of a tooth (in which case, the diagnosis can be confidently made on a radiograph). Only a small proportion (1-2%) of ovarian dermoids will undergo malignant transformation, and they are often incidental findings on imaging performed for another reason. However, larger dermoids can result in ovarian torsion, in which case the patient usually presents with acute symptoms.