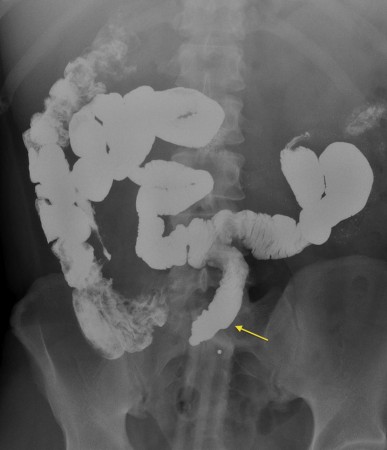 Meckel’s diverticulum. This small bowel follow-through image shows barium filling a blind-ending tubular structure (arrow) that is arising from the ileum, and is characteristic of a Meckel’s diverticulum. As you know, these occur in around 2% of the population and are usually within one to three feet of the ileocaecal valve. This one is pretty long, however they are sometimes as short as a centimetre. We sometimes pick them up as incidental findings on imaging, but they are difficult to appreciate on CT unless they have become inflamed or have caused bowel obstruction. Another method of identifying them is with a nuclear medicine scan called a pertechnetate scan, which will show a Meckel’s if it happens to have heterotopic gastric mucosa lining it (which around half of them do).