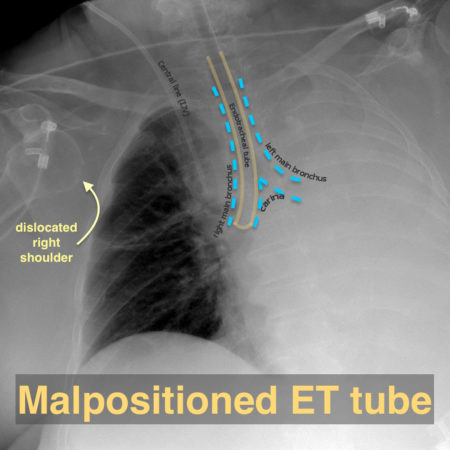 This is a portable CXR from a ventilated ICU patient. The endotracheal tube has been advanced several centimetres too far, and has passed beyond the carina down the (more vertically-oriented) right main bronchus. As a result, the left lung is not being ventilated and it has completely collapsed, causing a ‘white-out’ appearance in the left hemithorax.

This patient had recent trauma – note the dislocated right glenohumeral joint at the edge of the film.

There are several other potential causes of white-out of a hemithorax. One of the ways of helping narrow it down is by checking whether there is associated displacement of the trachea to the opposite side, or whether the trachea is pulled towards the side of the white-out.

Displacing trachea to opposite side:

Pulling trachea to side of white-out:

In some instances, the trachea won’t be displaced in either direction – this may happen when the white-out is due to consolidation. On AP portable CXRs like this example, it is often pretty tricky to work out whether the trachea is in the wrong place as the patient is usually rotated to one side or the other.