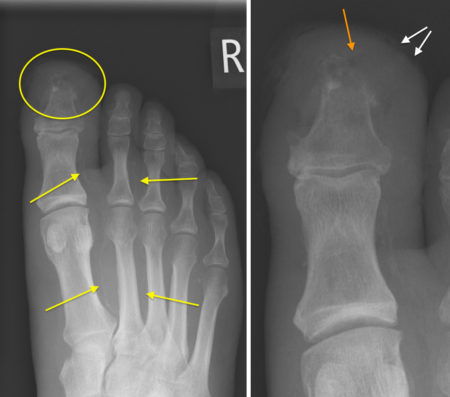 This 45-year-old man presented with an ulcer on his right big toe.

Radiographs were requested by his vascular surgeon, querying osteomyelitis.

On the image on the left you can see prominent calcification of several of the digital arteries in the forefoot, arrows. Radiographically-visible arterial calcification in a patient of this age should always make you think of underlying diabetes mellitus. In this case, the patient had recently been diagnosed with type II diabetes.

On the magnified image on the right, you can see irregularity of the soft tissue in the distal aspect of the big toe, white arrows, corresponding to the ulcer. Adjacent to this, the tuft of the distal phalanx shows features of osteomyelitis, with loss of the cortex and underlying bone destruction (circled on large image). You can also see a small focus of gas in the soft tissues (orange arrow).

While radiographs are, appropriately, the first line imaging test for suspected osteomyelitis, they are usually normal in the early stages of infection; appearances such as those in the example above often take two or more weeks to develop.

The radiographic features include:

Even when abnormal, radiographs often underestimate the extent of the infection. For this reason, and to allow an earlier diagnosis, MRI is routinely used in the investigation of osteomyelitis in any part of the body. On MRI, osteomyelitis manifests as reduced marrow signal on T1-weighted imaging, and high signal on fluid-sensitive sequences (such as T2-weighted, T2 fat-sat, STIR). If IV contrast is given, the abnormal marrow enhances. However, the majority of these patients will have diabetes, and associated diabetic nephropathy with renal impairment frequently mean that IV contrast is contra-indicated.

The most common site that we tend to see osteomyelitis is in the foot. Other frequent sites include the sacrum in patients with decubitus ulcers, and in the spine adjacent to infected disks (diskitis).