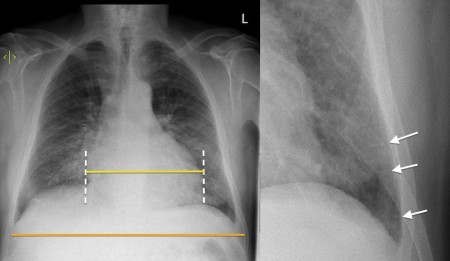 CCF. This patient has mild cardiomegaly – note the technique for measuring the cardiothoracic ratio. Students occasionally make the mistake of drawing the lines at the same level (rather than the thoracic width being measured at the widest point in the chest). In this example, there are Kerley B lines at the peripheries of the lung bases (better depicted in the magnified image), and there is some hazy increased opacification around the hila, consistent with alveolar oedema.