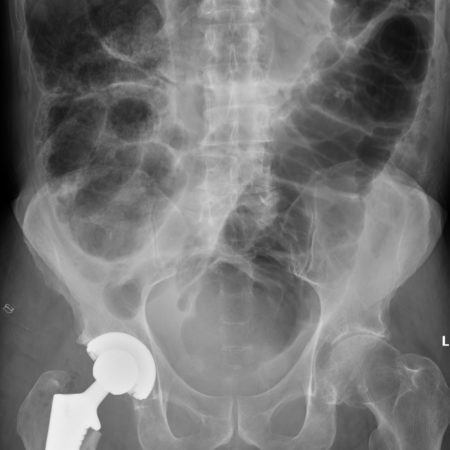 This 80-year-old man developed abdominal pain and distension three days after undergoing an elective right total hip replacement. His abdominal radiograph shows severe diffuse dilatation of the colon from caecum to rectum. The small bowel is normal in calibre. Note the right hip prosthesis with some residual post-operative gas in the joint, and adjacent skin staples.

CT performed the same day showed a similar appearance, with colonic dilatation as far as the rectum and with no obstructing lesion present.

This is an example of colonic pseudo-obstruction, also known as Ogilvie syndrome. This condition is generally seen in patients over the age of 60 and has similar clinical and radiographic features to true large bowel obstruction, except that no actual mechanical obstruction is present. It is caused by an imbalance in the autonomic nervous system. There are several recognised predisposing factors, which include:

While there is no actual obstruction, pseudo-obstruction can progress to perforation and potentially fatal peritonitis. In severe cases, treatment options include colonic decompression with a rectal tube or sigmoidoscope.