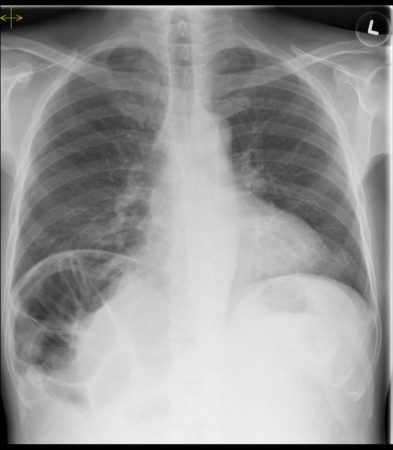 This erect CXR was performed in the ED as the patient had presented with acute abdominal pain. The question on the request was ‘? free air’.

While there is gas below the right hemidiaphragm, it does not have the typical appearance of free air and instead you will notice that there are haustrations extending across the lucency.

This is an example of a ‘pseudopneumoperitoneum’, in this case due to interposition of the colon between the liver and the right hemidiaphragm, which is also called ‘Chilaiditi’s sign’.

Chilaiditi’s sign is an acquired condition, not encountered in paediatric patients. There are several known predisposing factors that may allow the bowel to be repositioned between the liver and diaphragm:

While this is almost always an incidental and asymptomatic finding on a CXR, a small proportion of patients with colonic interposition will develop symptoms such as pain or constipation, in which case the term ‘Chilaiditi’s syndrome’ is used.

However, the main reason that it is important to be aware of colonic interposition is so that we don’t misinterpret it as a pneumoperitoneum and recommend an unnecessary abdominal CT.