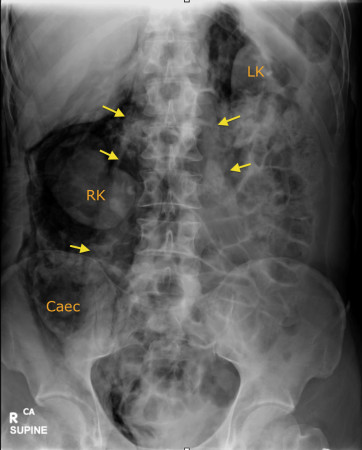 You should by now be familiar with the features of pneumoperitoneum on an erect CXR or supine PFA (if not, hit the search button and look for all the examples of it on this site). A less common place to see extraluminal gas on a PFA is in the retroperitoneum. This is more commonly iatrogenic in origin, and can occur during ERCP (especially after sphincterotomy) as well as during a colonoscopy (especially if a biopsy has been performed). Rarely, you might see it after spontaneous perforation of an ulcer in the posterior wall of the duodenum. The PFA appearances are very different to a pneumoperitoneum – instead of the free air outlining the small bowel wall (Rigler’s sign), it will outline retroperitoneal structures such as the kidneys (‘RK’ and ‘LK’ on this image), the caecum and ascending/descending colon (caecum is labelled here) and the psoas muscles (arrows). The air will often extend around the gastro-oesophageal junction resulting in a pneumomediastinum.

In this example, the patient developed severe abdominal pain following an ERCP and sphincterotomy.