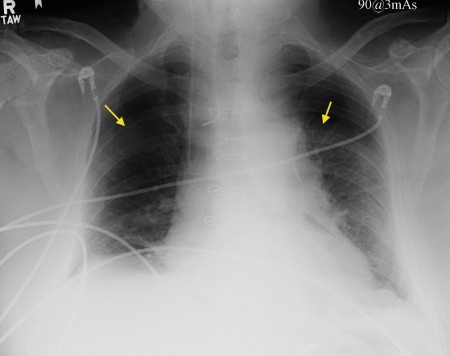 Pneumothorax post central venous line insertion. Chest radiographs are performed routinely following central venous line insertion, to check for catheter malpositioning and for pneumothorax or, much less commonly, haemothorax. In this example, attempted central line insertion through the left internal jugular was unsuccessful; this should have prompted a request for a CXR prior to attempting catheterization on the opposite side however this was not performed. There was some difficulty inserting a catheter on the right but this was eventually successful. Unfortunately the CXR at that point showed large bilateral pneumothoraces (arrows) – the patient required bilateral chest drains.