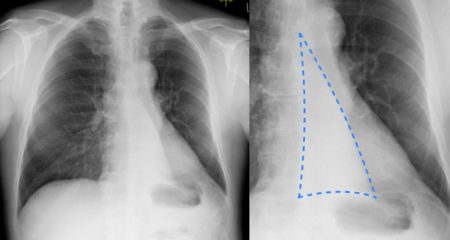 This male smoker in his 60s presented with haemoptysis.

His frontal CXR shows the textbook appearance of left lower lobe collapse, called the ‘sail sign’. The entire left lobe has collapsed and the end result is a triangular shaped opacity projected behind the heart, looking like a spinnaker sail (outlined in magnified image on right). You will also notice that there are some secondary signs of volume loss in the left hemithorax – the heart has shifted to the left (none of the right heart border is projected right of the thoracic spine), and the trachea has also shifted to that side.

In a patient of this age, especially a smoker, an appearance like this should make you suspicious of an underlying tumour. This patient underwent bronchoscopy, and an obstructing mass was found in the left lower lobe bronchus. Biopsy of this mass showed squamous cell carcinoma.