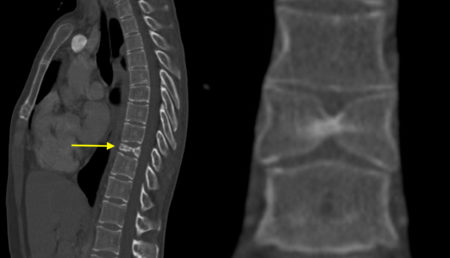 This CT spine was performed on a 20 year old woman who was in a road traffic accident. The sagittal image on the left shows what looks like a severe fracture of one of the lower thoracic vertebrae, arrow. However, the magnified coronal image on the right shows that this appearance is due an unusual ‘butterfly’ shape to the vertebral body caused by congenital incomplete fusion of the two halves of the vertebra.

This is an uncommon vertebral anomaly which is often discovered incidentally, although there is an association with other spinal disorders such as spina bifida and meningocoeles.

Another, similar form of vertebral anomaly is a hemivertebra, in which only one half of the vertebra develops – this results in only one of the butterfly ‘wings’ being present, and is typically associated with acute scoliosis, concave to the side of the missing half.