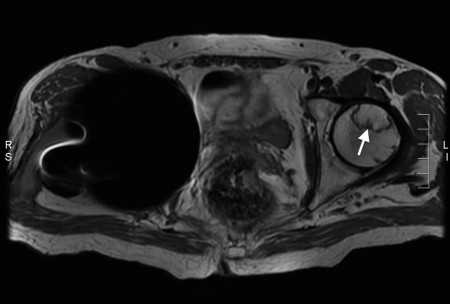 AVN. This 46 year old man is relatively young to have needed a right total hip replacement (note the large signal void caused by the metal prosthesis), however the clue to the reason behind it is visible in the left femoral head – a thin line of low signal (arrow), characteristic of avascular necrosis. The patient had been on long term steroid therapy. Whenever we find AVN on a plain film of the hips, we need to look for potential clues to the underlying cause. For example, we may be able to work out the reason a patient has been taking steroids (e.g. sacroiliitis in ankylosing spondylitis, bowel anastomotic staples in a patient with Crohn’s, erosion of the symphysis pubis in a patient with rheumatoid arthritis), or we may identify one of the other potential aetiologies (e.g. calcification of the pancreatitis from chronic pancreatitis).