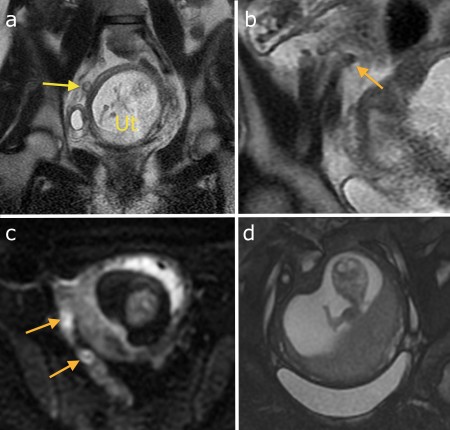 As discussed in the MRI section, MRI is considered safe to perform in the second and third trimesters of pregnancy and is frequently requested in the setting of acute abdominal pain in pregnant women where ultrasound has failed to make a diagnosis (which is often the case, as the distorted anatomy makes these scans difficult to carry out). This example shows acute appendicitis but the abnormality is fairly subtle. On image (a), there is a small tubular structure (arrow) adjacent to the gravid uterus (Ut). By scrolling back and forth on coronal and axial sequences it was possible to confirm that this represented the appendix. It is mildly dilated and there is some haziness of the fat around it. Helpfully, there is a small appendicolith in its proximal aspect (the low signal structure on magnified image (b), indicated by the orange arrow). Image (c) is from the diffusion weighted sequence and shows abnormal high signal in the appendix wall (arrows), indicating restricted diffusion and helping to confirm the diagnosis of acute appendicitis. Obviously, these are one of the bigger calls Radiologists will have to make – we don’t want to overcall appendicitis because of the risks of a GA in pregnancy, however a missed appendicitis can also have devastating consequences. Note how the fetus popped up in image (d) to give us a wave.