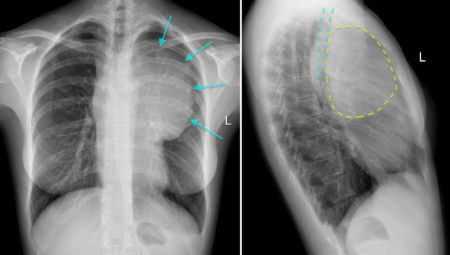 This 30-year-old woman presented to the ED with chest pain.

She underwent PA and lateral chest radiographs, which are shown here. The PA radiograph shows a very large mass extending laterally from the left side of the mediastinum (arrows). Its location in the anterior mediastinum is confirmed on the lateral view which shows that the mass (outlined in yellow) is displacing the trachea (blue lines) posteriorly.

The boundaries of the anterior mediastinum are the sternum anteriorly and the great vessels and brachiocephalic veins, pericardium and ascending aorta posteriorly. It normally contains only the thymus, lymph nodes, fat and some small vessels. Anterior mediastinal masses may arise from any of these structures.

Masses in this region may be discovered as incidental findings on imaging or the patient may present with symptoms due to compression of the airways or the superior vena cava, or because of invasion of nerves such as the vagus or recurrent laryngeal.

While chest radiographs are useful for identifying larger masses, small anterior mediastinal masses can be very subtle. CT is generally required for further evaluation of the extent of the mass and to derive a differential diagnosis for its aetiology.

The classic differential diagnosis for an anterior mediastinal mass is known as the 5 ‘T’s:

These are the most common causes of anterior mediastinal masses. There are other clues that can be used to narrow the differential diagnosis, such as the presence of fat or calcification within the mass.

This patient subsequently underwent CT. The coronal (left) and sagittal (right) CT images correlate nicely with the radiographs and delineate the full extent of the mass as well as showing its relations to the heart and aorta. 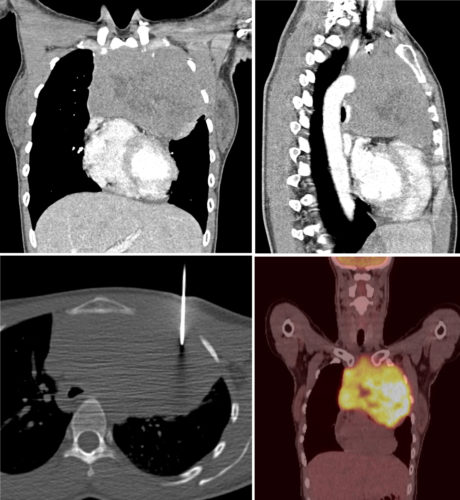