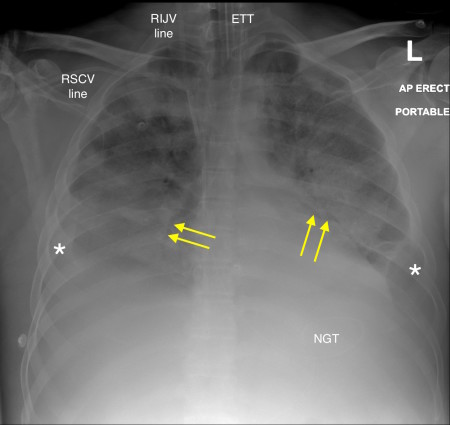 There are extensive bilateral alveolar infiltrates with air bronchograms (yellow arrows). This appearance could be caused by pulmonary oedema however the heart looks normal in size (even allowing for the fact that this is an AP radiograph). There are also bilateral pleural effusions (*).

Typically, pleural effusions are absent in ARDS however they can occur, and of course are very common in patients with acute pancreatitis as in this case.

ARDS can be difficult to distinguish from pulmonary oedema on a CXR. Helpful clues include: normal heart size, absent pleural effusions, absent Kerley B lines, and the presence of air bronchograms (relatively uncommon in pulmonary oedema). In addition, the alveolar infiltrates in ARDS tend to involve all regions of the lungs rather than the classic perihilar (‘batwing’) pattern typically seen in pulmonary oedema.

In practice, it can be difficult to confidently differentiate between the two (and, indeed, many patients have both ARDS and pulmonary oedema simultaneously), and it may take a trial of diuretics to tell the difference.